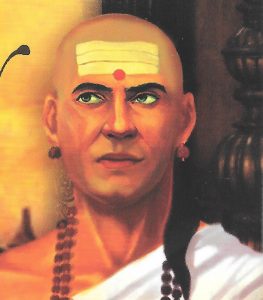 CHANAKYA was a great teacher and philosopher who developed into a king maker and a royal adviser who could address and remedy any adverse political situation or management problems. He wrote the ancient political book called the Arthashastra, which could serve as a code of conduct for any ruler desiring solid, good governance. As such, he is considered as the man who led the way in the field of political science and economics in India. He can be described as Chanakya the administrator. In some instances he is referred by the names of Kautilya and Vishnugupta of which the former probably depicts his sub-cast.

There isn’t much recorded historical information about Chanakya. But there are some different types of legendry accounts of him.  In Mahavamsa, a Buddhist literature and Parishistaparvan, a Jain literature we find fairly parallel descriptions.

What is common in these is that Chanakya was born in a Bramin family with a canine tooth. The canine tooth was (may be still is) regarded as a mark of Royalty, conveying that the possessor would one day be a king. His mother cut off this tooth out of her anxiety that her son would one day leave her. This plus little twisted legs gave Chanakya an ugly appearance. One day Chanakya went for an alms giving ceremony for Bramins organized by king Chandananda. Seeing his ugly appearance the king turned him away. It angered Chanakaya who tore off his holy thread (which all Brahmins wear) and openly cursed the king. The king ordered his arrest. Chanakya befriended the king’s son and correctly judging his character, in eloquently logical language instigated him to seize the throne. The king’s son was taken up and with his help Chankya fled the palace secretly.

Chanakya then made a lot of money, mainly in the form of Gold coins. On his travels he once came across a group of children playing. One boy who was playing the role of king particularly impressed Chanakya who saw in him the characteristics of an ideal emperor. That boy, Chandragupta by name, happened to be from a royal family who was adopted by a hunter after his father was killed in an uprising. Chankaya met the foster father, told him that his ‘adopted’ son is talented and he would like to teach him some trade. He paid the father in gold coins and took the boy with him.

Chanakya liked this boy in preference to Prabbata, King Chandanada’s son whom he had befriended while escaping the palace, where he was ordered to be arrested. And indeed this boy Chandragupta (which was his name) proved to be really having the mind set of an emperor. Together Chanakya and Chandragupta made an ideal Guru-Disciple team. Endeavoring jointly they assembled an army and invaded Chandanada’s kingdom. They targeted the palace straight away but lost severely.  They made a second try. This time starting from the periphery of the kingdom and progressing forward over a telescoped period of time, in a carefully designed manner. Chandananda was killed and Chandragupta throned, who in time came to be known as Chandragupta Maurya.  Chanakya prevailed on Chandragupta as well as his son Bindusara. Chanakya had been their Royal ‘Guru’ and his nurturing and coaching of them had a threefold approach; ruthless in acquiring rulership, asserting that rulership among all fellow royal members and giving a welfare and firm governance to the subjects. He helped them master all the territory between the eastern and western sea of India, destroying all the kings and nobles of the countries in between. Chanakya thus by mere strength of his political skills established the Maurya Empire. Chanakya remained a great administrator till he died. Besides the treaty of ‘Arthashastra’ formulated by Chanakya, all his policy based on experience, knowledge and ideas are put up as ‘Chanakya Neethi’. It is beneficial for all who want to learn and excel in whatever field they are. The basics of his teaching has been: ‘lust, anger, greed, flavor, makeup, entertainment, having desire for non human animal product deviates you from peak performance. These things should be abandoned in the process of perfectness, imbibed from nature; strived at’ —