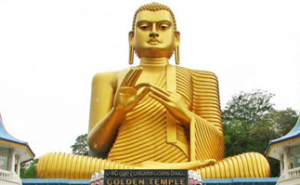 The religion Buddhism was founded on the teachings of Buddha, the enlightened. He is known as Gautama Buddha. The name given to him by the Parents however is Siddhartha. His period is between the 6th and the 5th century B.C. (before Christ –quiz – When was he born 5th or 6th century?)

Gautama was born in Lumbini which is present day Nepal.  His father is king Suddhodana who ruled from Kapilavastu and his mother Maya died soon after giving birth to Siddhartha. Siddhartha got married to Yashodara and had a son by the name of Rahula.  He was raked with deep dissatisfaction on seeing people suffering. So he left the palace and went out in disgust; an act which we can equate to renouncing earthly life.

He spent many years engaging other thinkers and practicing austerities, and meditating. He got enlightenment while meditating under a Pipal tree (Ficus religiosa; sacred Fig tree) at Budhagaya, a place found in the state of Bihar in India. Thereafter he came to be known as the Buddha which means the ‘enlightened one’.  He travelled many places teaching and dispelling people’s ignorance. His teachings and ‘arguments’ are rationalistic and can be termed scientific.

The gist of his teachings is diagnosis and cure for human suffering. He speaks of four noble truths:

The Buddha accepts transmigration (rebirth) and karma but rejects the idea of ‘Soul’. He says that the ultimate goal of following rightful path of life is the extinction of desire, attachment, greed, hatred, ignorance and sense of ego. This results in the state of ‘Nibbana’; riddance of all sufferings. The serene posture of the Buddha is a body language of this state.

Buddha was pragmatic and understood the common man. To them he offered a code of conduct for virtuous living and social ethics. There is emphasis on non-violence in these. He advocates a middle path for the common man, neither extreme indulgence nor too much restrain.

When the Buddha spoke everybody listened. Many kings got inspired by his ideas and among them emperor Ashoka, who spread Buddhism to Srilanka, is noteworthy.

Lord Buddha’ Darmakaya meditation a modification of Vipasanna meditation where the mind is focused at the Center of the body which is two fingers width above the navel. At the same time controlling all senses as in Gnana yoga and keeping the mind in the present moment.   The only bit of yoga is the lotus position

As you may know there is no God or soul in Buddhism. Only one’s conscience and karma that move from body to body in re birth. Unlike in our religion where it’s soul and karma passing on in reincarnation.